Last week, I started with some good tried and true tomato varieties to include in your 2020 Victory Garden. Tomatoes are hands down my favorite vegetable to grow, but peppers usually end up the 2nd most grown vegetable in my garden.

I honestly, don’t remember or have any stories of what my grandparents grew, pepper wise, but I can almost guarantee a bell pepper was in the mix. Oddly enough, I am horrible at getting bells to grow. Since they are prolific at the farmer’s market, I don’t worry about it. We typically grow medium hot peppers and whatever weird ones I think are worth trying. There are a handful of the common peppers I vow not take up space with but, by mid summer, I’ve stashed some into extra pots.

So today, I am going to share a handful of different pepper varieties that fit into today’s Victory Garden. Once again, I’ve tried to link to seeds still available, and varieties likely found at garden centers. 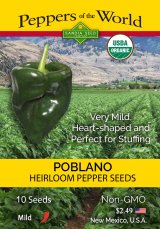 *Side note, for many years, I have referred to any open-pollinated seed variety as HEIRLOOM (even if it is a newer variety).  In doing research for my posts, I’ve come across the notion that “heirloom” should only be applied to open-pollinated varieties grown pre-WWII. I suppose I see the point and I guess it’s a topic to be debated. From my point of view, I’ve always referred to any open-pollinated seed as “heirloom” and will likely continue to so. But, as you may know, I am always interested in the past and usually point out the age of the variety. I typically denote when a variety is newer by saying so.

3 thoughts on “Peppers for your Victory Garden!”